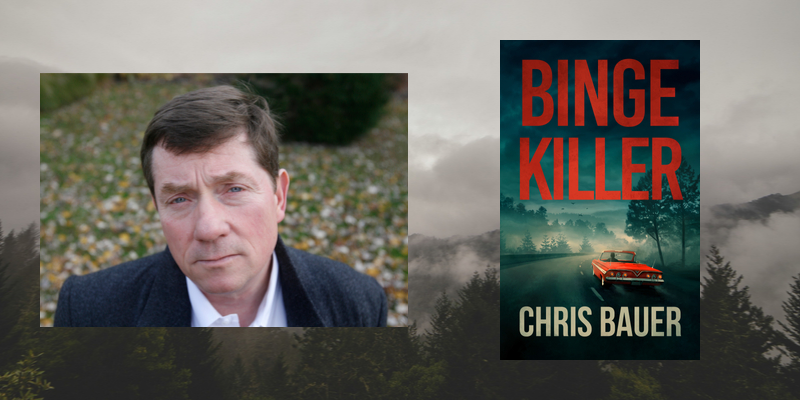 Chris has had some lengthy stops as an adult in Michigan and Connecticut, and he thinks Pittsburgh is a great city even though some of his fictional characters do not. He still does most of his own stunts, and he once passed for Chip Douglas of My Three Sons TV fame on a Wildwood, NJ boardwalk. He’s a member of International Thriller Writers, and his work has been recognized by the National Writers Association, the Writers Room of Bucks County (PA), and the Maryland Writers Association. He likes the pie more than the turkey.

SRP: Where did you come up with the idea for Binge Killer, and what can you tell us about the plot?

Bauer: “Binge Killer came to life when I was looking for a way to showcase the growing number of vocal women who, paraphrasing Peter Finch as Howard Beale in the film Network, are mad as hell and not going to take it anymore. A group of small-town female bowlers, quilters, and bingo players with similar ideals have taken to solving matters like violent crime, slow or ambivalent legal processes, and impotent politicians, into their own hands quietly and effectively, careful not to draw attention to themselves. The problem is their town is outed by a national publication as the “Safest Town in America” for its impressive no-crime record, and the anti-heroines (plus one male anti-hero), who all simply want to be left alone, find themselves in the middle of a fugitive recovery effort stemming from the town’s new notoriety. Protagonist Counsel Fungo, female bounty hunter, looks to capture a bail-jumping sexual predator with a history of aliases and identity thefts, and who is now more dangerous because he’s been diagnosed with a terminal cancer and has nothing to lose, with their chase reaching Rancor, a quiet, anonymous small town in upstate PA. The novel’s bones are from a short story I wrote years ago and submitted to local writers groups and a few select noir ezines. The peer writers loved it but the magazines didn’t pick it up. So I made some revisions to the characters when deciding to double-down by turning it into a novel, fortified by feedback from a content editor. Lots of mystery and violence, some twists, colorful language, gore, and dark humor.”

SRP: How did you choose this setting?

Bauer: “Upstate Pennsylvania in and around Scranton has a rich coal mining heritage, a surplus of bowlers, and a reputation for tough-minded residents known for being able to handle themselves. Plus it has the Pocono Mountains, utilized well here during the climax. There are abandoned coalmines, a real-life geological wonder turned tourist attraction with the word “pothole” as part of its official title (Archbald Pothole State Park is renamed in the novel, although I kept “pothole”; how could I not?). Plus it has nearby Centralia, PA, where a coal seam fire that started in a strip mine in 1962 is still burning “hotter than the planet Mercury, its atmosphere as poisonous as Saturn’s,” per David DeKok’s Unseen Danger: A Tragedy of People, Government, and the Centralia Mine Fire, University of Pennsylvania Press, 1986.”

SRP: What’s next for the series?

Bauer: “An unsolved murder committed in Philadelphia comes back to haunt one of the town’s inhabitants whose daughter is now an FBI special agent in charge of the FBI’s Philadelphia region. The daughter’s adult relationship with her father is strained, one, because of her suspicions about the town, and two, because this knowledge goes against everything she’s ever believed in regarding legal law enforcement. I’m still noodling on this one with no words on page yet.”

SRP: What are you working on now?

Bauer: “Working on the follow up to crime thriller Hiding Among the Dead, a second novel in what I’m calling the Blessid Trauma series, title TBD (see below). A certain female mob cleaner-fixer has skipped out on Ka Hui, the Hawai‘ian mob that resurrected itself on the US mainland in Philadelphia. Ka Hui wants her back for typical macho mob bullsh*t reasons, but also because the top mob guy is in love with her. The setting is the Hawai‘ian Islands and involves a small, storied leeward island that is privately owned by a family who purchased it in the 1860s and promised to maintain its third-world culture in perpetuity, but is struggling now to keep this promise. After WWII’s Pearl Harbor attack, when a Japanese pilot crash-landed his mayday-ing Zero there and perished a few days later, the US Navy located its early missile warning radar apparatus on the island’s tallest elevation, and this current-day relationship is a major source of the inhabitants’ income, which is supplemented by ultra-expensive shell leis crafted from special mollusks found on its beaches and nowhere else on the planet. The island’s small population and its descendants are being brutally murdered one-by-one. The murders are allegedly committed by Ka Hui, but the mob denies responsibility. Tentatively titled Her Twelve-Letter Alphabet, as a nod toward the real-life Hawai‘ian language alphabet, this crime thriller will release in 2020.

SRP: What are you reading now, and what good books have you read lately?

Bauer: “Now reading a trio of books. Wool, a post-apocalyptic thriller by Hugh Howey set in a ‘ruined and toxic future.’ Stieg Larsson’s The Girl with the Dragon Tattoo, because I was told Larson’s female characterizations are phenomenal. And a re-read of one of my favorite novels, Chance, a story about the most famous baseball shortstop of all time, even if it’s only in the mind of the storyteller, by Steve Shilstone. I love the voice of Shilstone’s character’s biographer, an ‘old weird poet.’ I have to mention Motherless Brooklyn by Jonathan Lethem as one of the great books I’ve read lately even though it’s been out for a while and is soon to be a movie (11/1/19) starring Edward Norton and Bruce Willis. It showcases Lionel “Freak Show” Essrog, billed as a detective, but he’s really more of a mobster. This character had a major influence in characters I created for Binge Killer. I loved Motherless Brooklyn!

A bounty hunter and a maniacal killer come face-to-face… in a town with its own dark secret.

​Counsel Fungo is a unique woman. She’s a narcissistic bounty hunter suffering from Tourette syndrome, and she’s very good at her job. Her two canine companions are officially her therapy dogs, but unofficially she considers them to be her partners. She’s suffered intense loss and has been the victim of a horrible crime. These experiences now drive her unquenchable thirst for justice. She’ll do anything to stop criminals from preying on the vulnerable.

Randall Burton is a binge-killing rapist who has evaded the law and is not long for this earth. Just out of prison and diagnosed with a terminal disease, he’s jumped bail and decides to go out in a blaze of glory. He heads to sleepy Rancor, Pennsylvania, named one of the “Safest Towns in America,” for one last depraved hurrah. A quiet town tucked away in the Poconos, its citizens are mostly widowers, bowlers, and bingo players.

With Randall about to start his bloody killing spree, bounty hunter Counsel Fungo arrives in town, hoping she’s not too late.

But Rancor, Pennsylvania is not as ordinary as it seems.

There’s a reason it hasn’t had a major crime in the past 50 years. And neither Counsel nor the killer are ready for what this quiet town has in store…